A Quick Guide to Terpenes

Terpenes are aromatic compounds found in many plants, though many people commonly associate them with cannabis because cannabis plants contain high concentrations of them.

The fragrance of most plants is due to a combination of terpenes. Over 100 different terpenes have been identified in the cannabis plant. In nature, these terpenes protect the plants from animal grazing or infectious germs.
However, terpenes may also offer some health benefits to the human body. As regulations surrounding cannabis become less strict, scientists are carrying out more research into these possible benefits.

How do terpenes affect people?

Many terpenes are bioactive, which means they may affect the body. This effect will vary based on the concentration of the terpene itself and how a person uses it.
Because terpenes produce vibrant smells, they form the basis of many essential oils and are an integral part of many alternative therapies, such as aromatherapy. Inhaling the scents from some plants and essential oils may affect a person’s mood and stress levels.

Some terpenes might promote relaxation and stress-relief, while others potentially promote focus and alertness. Myrcene, for example, is found in many relaxing cannabis strains like Blue Dream and Granddaddy Purple. Terpinolene is commonly found in uplifting, active strains like Jack Herer and Ghost Train Haze.
The effect profile of any given terpene may change in the presence of other compounds in a phenomenon known as the entourage effect. More research is needed to understand each terpene’s effect when used in harmony with others.

Why use terpene infused E-liquid?

Terpenes are now being isolated and concentrated into oils for individual vaping and those in the know are saying that it provides much more than a smell-and-taste experience. Many people in the cannabis and science communities believe that terpenes affect the way your brain receives cannabinoids such CBD. For example, vaping the terpene pinene; found in earthy strains like OG Kush (as well as in pine needles and conifer trees) is thought to bring focus. And vaping linalool found in floral strains like Lavender Kush and mints, cinnamon and rosewood – will bring relaxation.

Which terpene profile should you buy?

There are two factors to consider when selecting a terpene profile – Flavour and the potential effect it can have on your mind and body. As some terpenes promote relaxation, while others potentially promote focus, it is important to select the right one for you. Whether you’re buying Terpene infused E-liquids or Pure Terpene Profiles, we have broken down the effects of each flavour in the product description section.

How are they different from cannabinoids?

Do terpenes get you high?

Terpenes do not produce a psychoactive ‘high’ in the same way as THC. However, they do work in more subtle ways to alter mood through interaction with the serotonin and dopamine systems.

Will terpenes show up on a drug test?

Nope! You’re completely safe with terpenes when it comes to drug testing at work. These molecules are found everywhere, and chances are you unknowingly ingest plenty of terpenes each day.

What are terpenes used in?

In summary, terpenes are used to add that characteristic smell and flavour of some cannabis varieties such as Super Lemon Haze or Blackberry Kush to all kinds of products, for example:

All the Terpene Profiles we sell contain only 100% natural terpenes that come from plants and flowers. They do not contain any diluents or additives.

What do our terpene infused e-liquids contain?

Can terpenes be ingested?

Pure terpenes cannot be ingested directly; they must be diluted in food or drinks.
They must be used in the correct proportions with the drink, food or e-liquids that are to be flavoured. We suggest that you do not exceed 4% of terpenes. 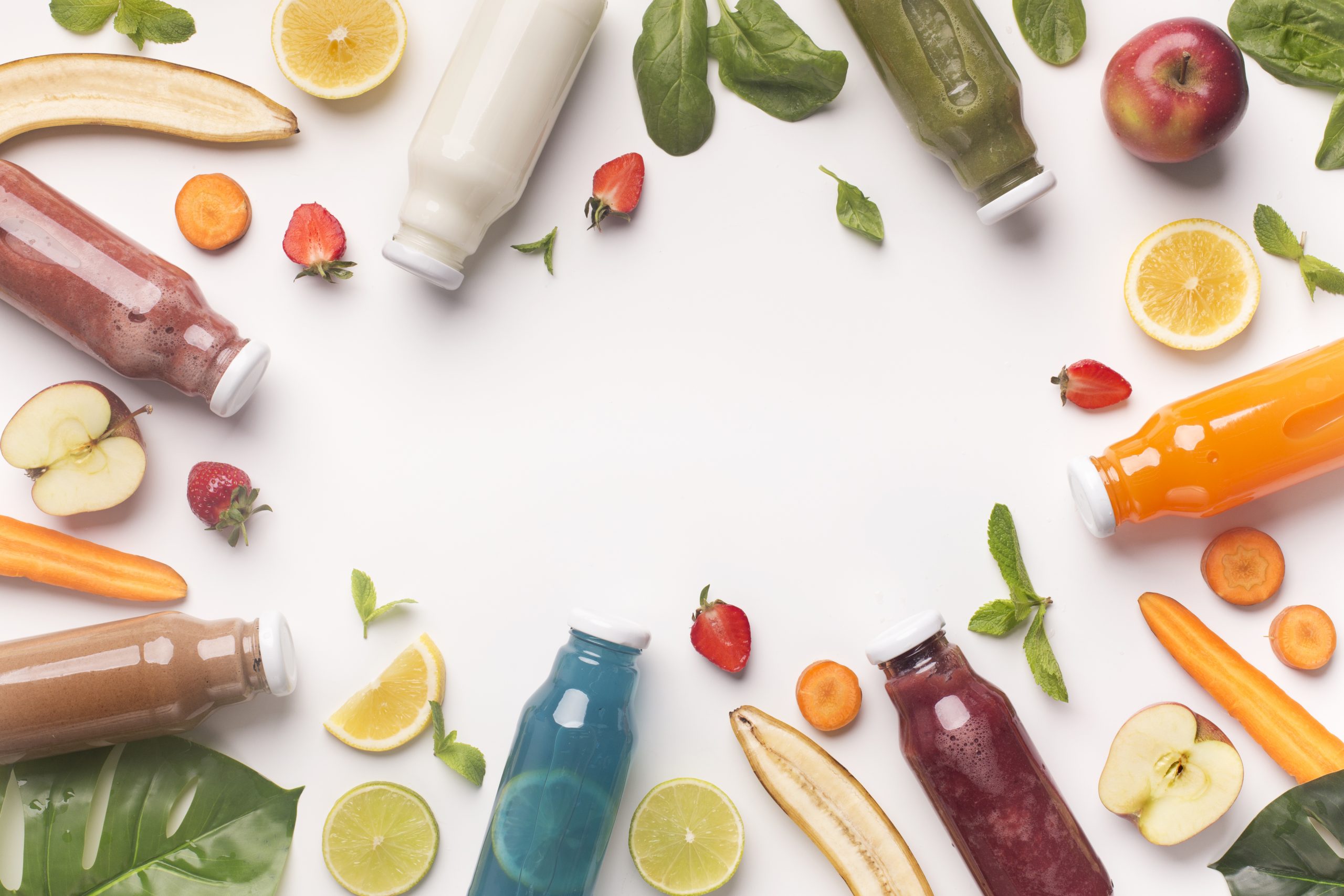 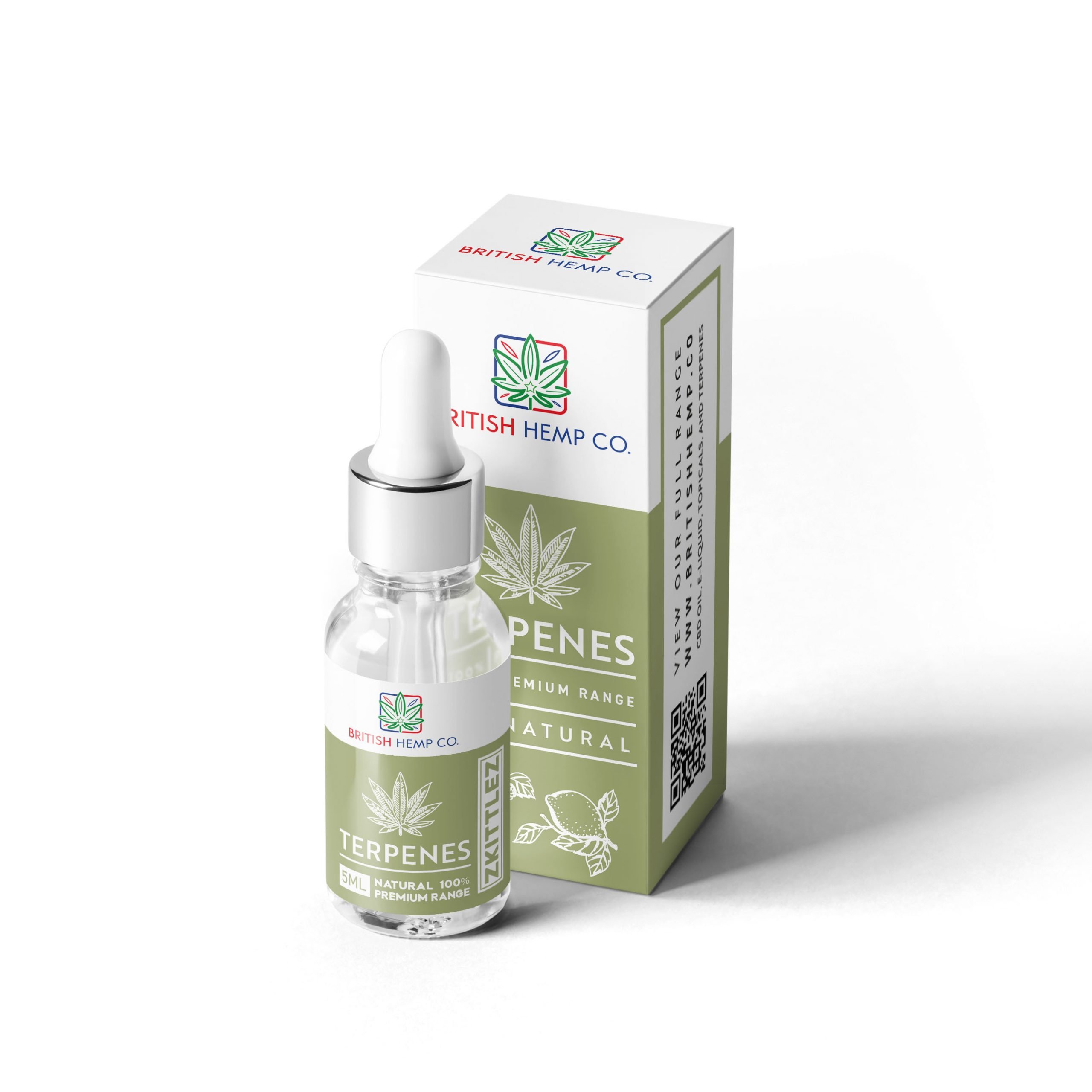 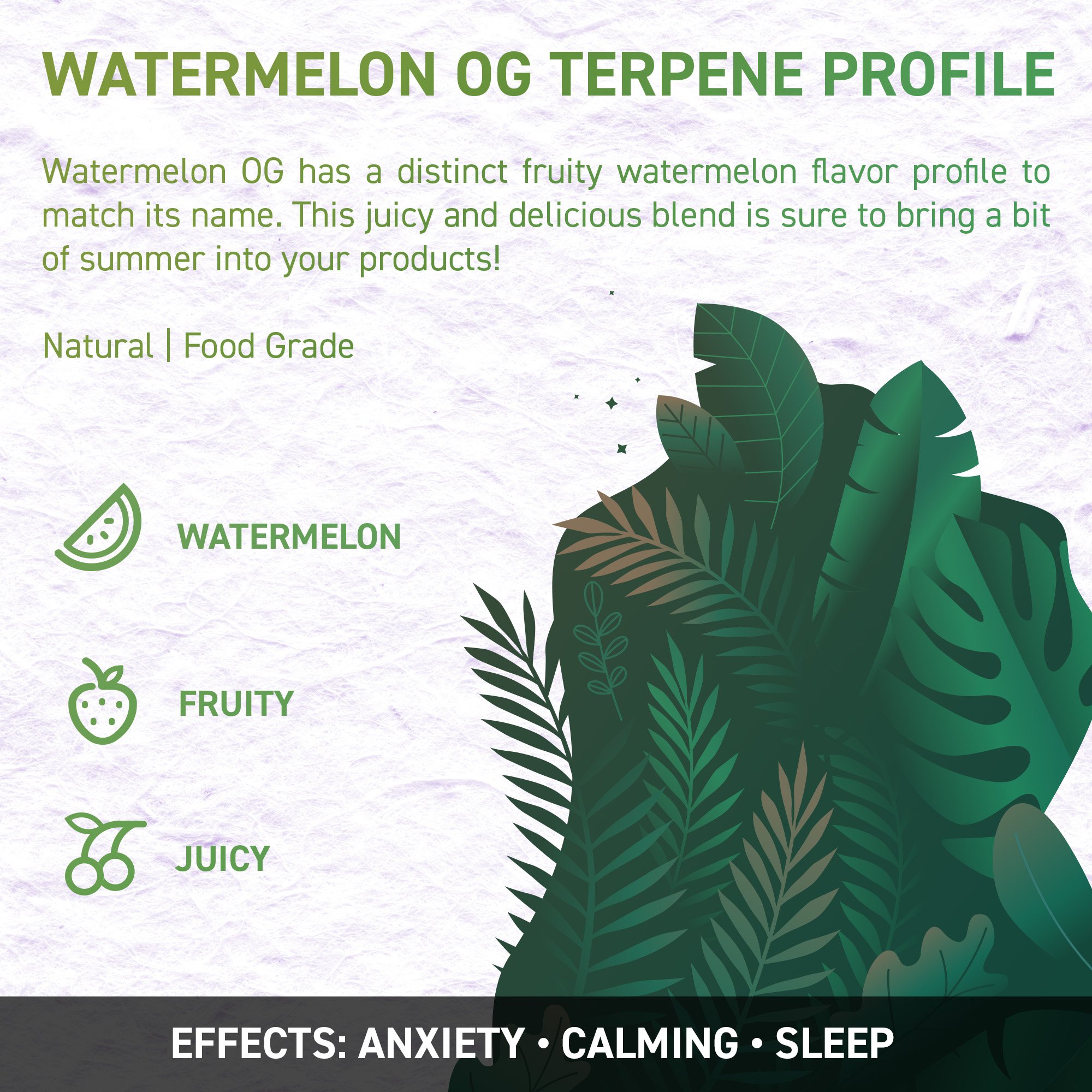 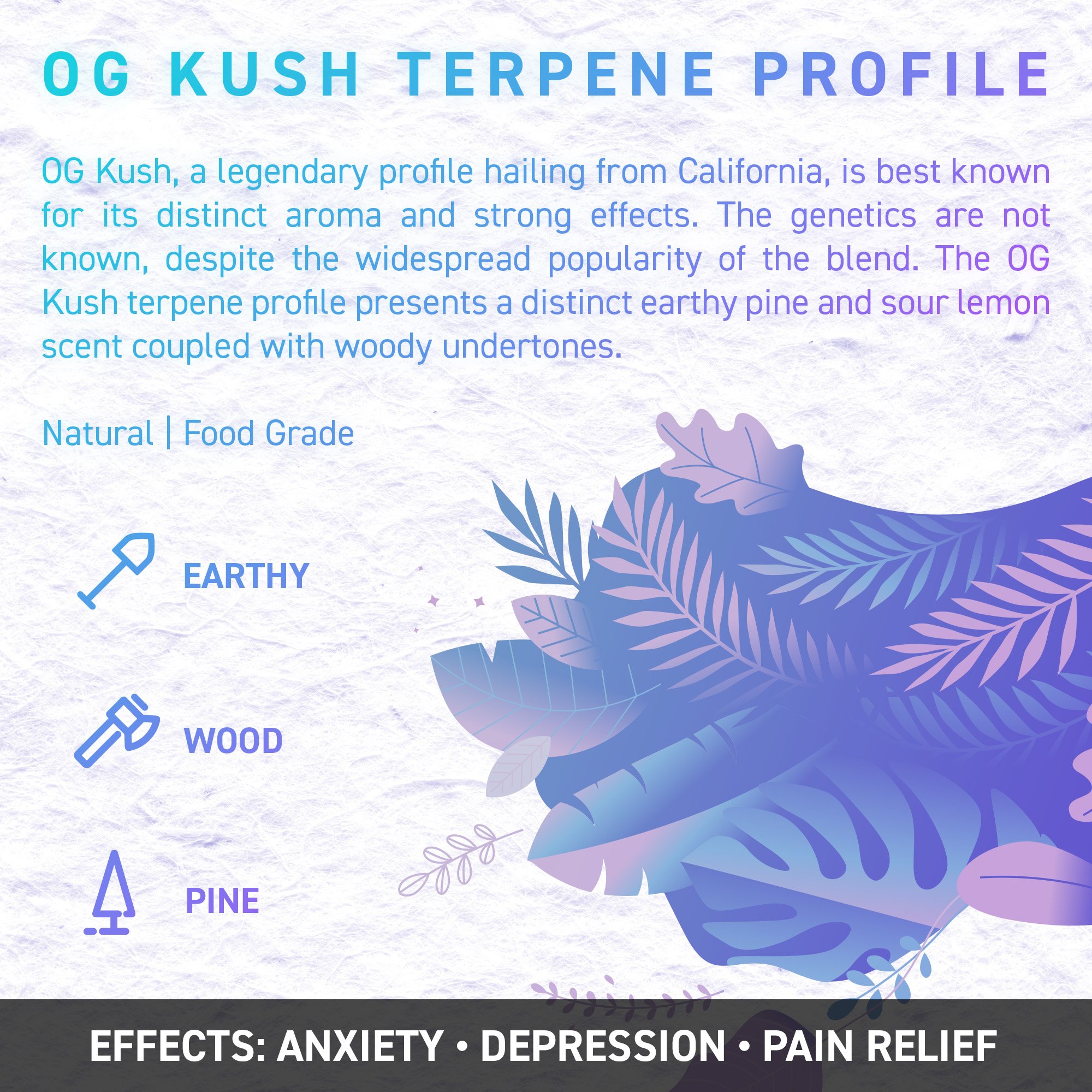 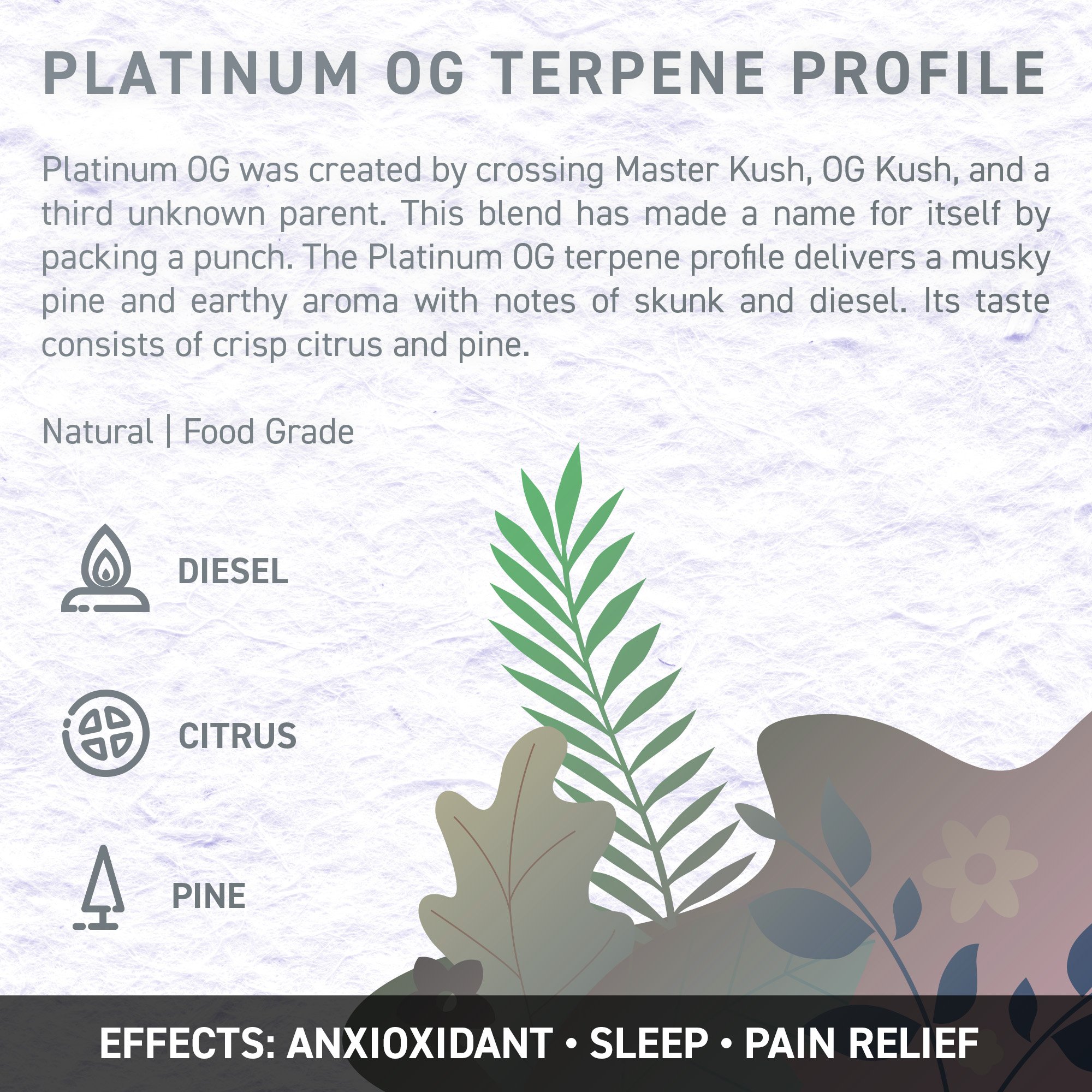