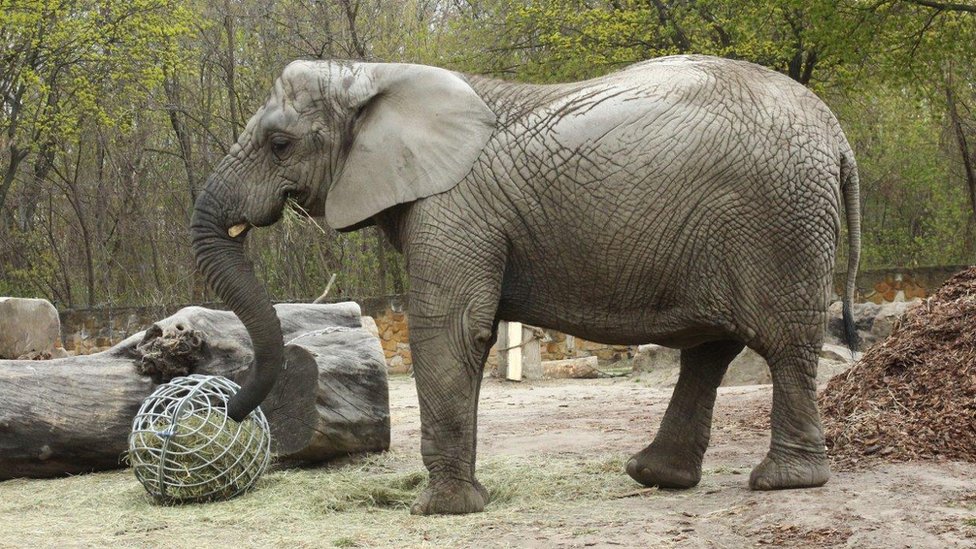 This year has been a difficult time for Fredzia, a young female African elephant at Warsaw Zoo in the Polish capital.

The zoo’s four elephants became three in March, following the death of Erna, the largest female and elder of the herd.

Erna’s death left Fredzia in mourning, putting her under stress.

Zoo keepers noticed an immediate change in Frezia’s behaviour, as she attempted to make sense of life without Erna.

“Fredzia reacted strangely when she saw Erna’s body. She was really excited,” Dr Agnieszka Czujkowska, head of the zoo’s Animal Rehabilitation Department, told the BBC. “But you could see that she was also grieving actually, she was also depressed.”

Since then, zoo keepers say Fredzia has displayed signs of stress, as she struggles to establish a new relationship with her female companion, Buba. It can take months or even years for elephants to cope with the loss of an elder and restore a sense of harmony within the herd.

“This is a huge game-changer in every elephant group. Elephants might have behavioural problems when the structure of a group changes,” Dr Czujkowska said.

While distressing for Fredzia, this emotional turmoil has presented Warsaw Zoo with an opportunity to test an experimental new treatment.

Dr Czujkowska and her colleagues have launched a project to check whether cannabis-extract oil will reduce anxiety in the zoo’s animals.

Cannabidiol, also known as CBD oil, is derived from a cannabis plant compound.

The oil is thought to stimulate the production of serotonin and dopamine, messenger chemicals in the brain, which can help combat depression.

The zoo’s elephants will be the first animals to be given the CBD oil, as they are prone to stress and at the same time relatively easy to monitor.

Given her recent behaviour, Fredzia is thought to be the ideal candidate for the study.

“When Erna passed away, everything changed. I don’t think Fredzia was ready for such a big change,” Dr Czujkowska said.

“Fredzia is always thinking about what Buba is doing now, before that she was more calm.”

The first stage of the trial has already been completed. It involved collecting faeces, saliva and blood samples from the elephants to monitor their cortisol levels. Cortisol is a hormone produced in the bodies of humans and animals in stressful situations.

“We are planning to give them the CBD and measure the cortisol again. This is the experiment. Then we know for sure [the oil] is working or not,” Dr Czujkowska said.

The CBD oil will be administered directly to the elephants’ mouths or mixed in with their food. Their health will be regularly checked through blood tests.

Dr Czujkowska does not expect the elephants to experience any serious side effects.

“It’s not very potent. The only side effect will be some behavioural changes,” Dr Czujkowska said. “We will have to manage these to achieve the results we want.”

Dr Czujkowska said that, to her knowledge, the project was the first of its kind to monitor the cortisol levels of elephants before and after they have taken CBD oil.

CBD products designed for human consumption have been on the market for years in some countries. They are used by some to treat conditions such as pain or insomnia, but regulators have raised safety concerns.

Studies of CBD products are ongoing and last year, two cannabis-based medicines, used to treat epilepsy and multiple sclerosis, were approved for use by the NHS in England.

Originally posted by The BBC https://www.bbc.co.uk/news/world-europe-53907689